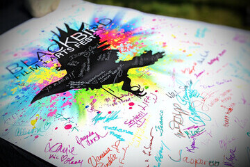 The Blackbird Film Festival returns to the SUNY Cortland campus and community of Cortland May 19-22.

Filmmakers from around the world submitted a total of 1,196 films to the Blackbird jury. The festival is directed by Samuel Avery, an associate professor of communications and media studies at SUNY Cortland, and its staff includes many young alumni and interns.

Most screening blocks are held at the Old Main Brown Auditorium, although the festival also hosts additional VIP events at downtown locations such as BRU64, Lynne Parks ’68 SUNY Cortland Alumni House and the Hollywood Restaurant.

A full schedule of events is available online.

“We’re excited to be back,” said Avery. “We’ve been off campus since 2020 and it feels like it’s been ages since we hosted this festival in Brown (Auditorium). So we are excited and also a bit scared.”

Thematic blocks for the 2022 festival are:

This is Not a War Story, a feature-length drama film directed by Talia Lugacy and executive produced by Rosario Dawson, opens Sunday, May 15 at 4 p.m. at the Center for the Arts in Homer. The film examines the lives of combat veterans in New York City whose anti-war art, poetry and papermaking bring them together despite the challenges they face in healing from this trauma.

“These are all-star pre-COVID interns,” Avery said, noting that the students helped transform the 2020 and 2021 festival into a drive-in, outdoor event at Greek Peak Mountain Resort. “Blackbird would never have survived (the COVID-19 pandemic) if it weren’t for the courage of these former interns.”

In addition to the film screenings, Blackbird will host several other community events throughout the weekend, including a Paint and Sip, a panel discussion on independent film distribution and an awards ceremony. Some of these events require tickets and fees. More information is available online.

Find out more about Blackbird Film Festival 2022 at blackbirdfilmfest.com.