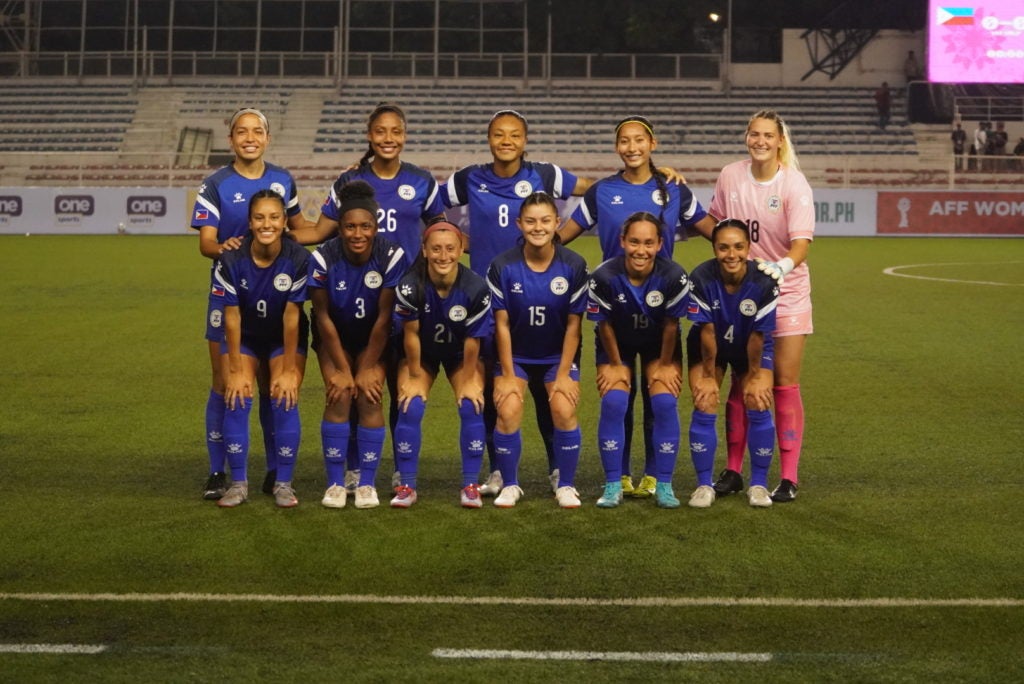 The Filipinas take time out for a photo op after stunning a heavily favored Australian women’s team at the start of the Asian Football Association Women’s Championship at the Rizal Memorial Football Stadium in Manila on Monday evening, July 4. | Photo from the PFF website

The Filipinas’ always reliable striker Sarina Bolden scored the decisive goal in the 60th minute to upset Australia in Group A.

Their win took them to the top of the team standings in Group A, along with Thailand, who defeated Indonesia 4-0 in the other match at Binan Stadium in Laguna.

The Filipinas defied the Aussies’ relentless attacks in the first half, putting in a tough defense with every possession. The Aussies had four clear tries, two saved by Olivia McDaniel while two went wide.

Bolden almost scored in the 48th minute when Katrina Guillo lobbed from the right wing, but her header went over the bar.

The momentum changed in the latter parts of the second half as the Filipinas began penetrating the Australians’ defense with their consistent attacks.

Bolden scored the only goal in the 60th minute after she perfectly hit a header from Eva Madarang’s long pass.

Australia goalkeeper Jada Mathyssen-Whyman looked helpless as she chased the ball as it landed in the goal a few yards from her.

“This is an incredible win for us. As I said before, it doesn’t matter if this was Australia’s U23 squad, it’s a very strong squad and among the best in the world so it was good to win against them,” said Philippines head coach Alan Stajcic .

Furthermore, Stajcic revealed that the fans watching the game were instrumental in their victory.

“They really inspired us to do our best. They were also amazing at braving the rain. We wish there were more, but I expect this win will encourage more of them in our following games,” added Stajcic.

The Filipinas meet Singapore tomorrow at 19:00 at the same venue.

Disclaimer: The comments uploaded on this website do not necessarily represent or reflect the views of the management and owner of Cebudailynews. We reserve the right to disqualify comments that we believe do not meet our editorial standards.