We asked Iain Macintosh to manage Newcastle United at Football Manager 2022 and eight months later he’s still there. We’re in the middle of season four and he still hasn’t managed to get himself fired.

After playing against the kids and fringe players in Paris we’re in relatively good shape for the visit of the lumbering dinosaur wondering what that bright light in the sky Tottenham Hotspur could be. We don’t have a proper left-back available, so we’ll shift our focus to the right and let Wilfried Singo play wildly down the flank. Hopefully that should be enough to break their thin resistance lines. I badly need some goals from Benjamin Sesko, who was seriously underwhelmed in his first year at the top and has only scored three league goals all season. With Andrea Belotti in his 30s and slowing down, this is not the succession plan I wanted. 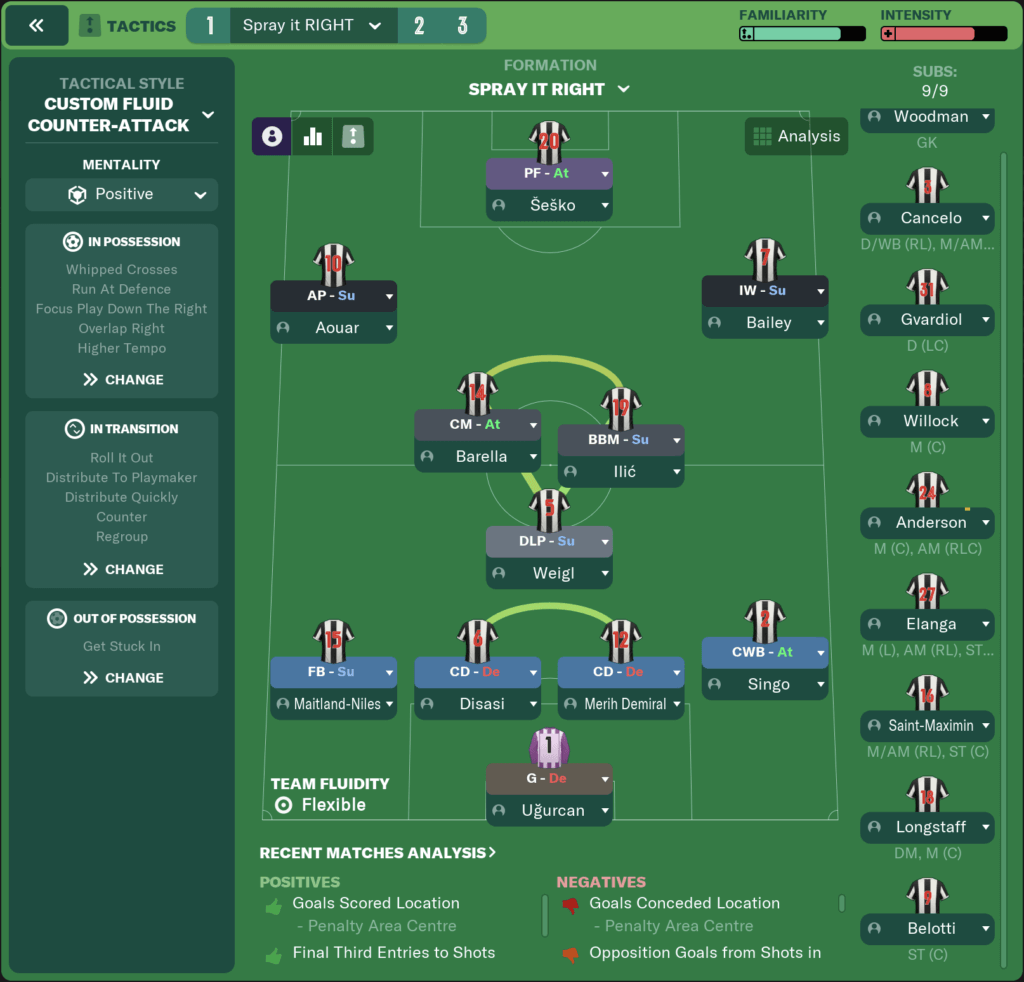 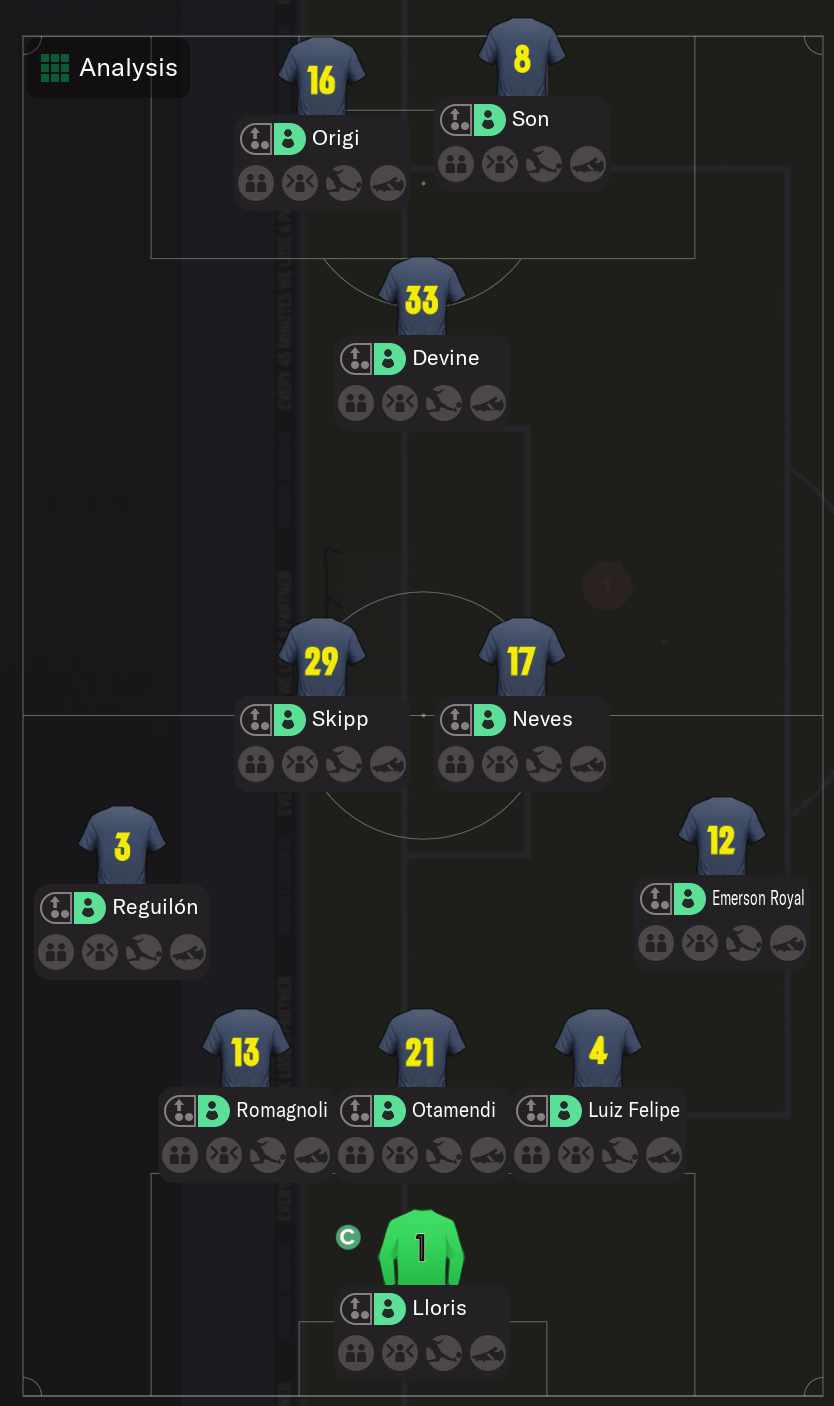 Tottenham are poor and they know it. With caretaker Dean Rastrick in the dugout, they play a deep back five and prevent us from creating any significant chances in the first half. Mind you, this isn’t usually a problem because over the years we’ve gotten very good at converting less than significant opportunities. But we lost our bearings this season. Our post corners routinely go over the bar, our snaps are wild and slapdash. We lost our lead. Poor Sesko works unsuccessfully up front, his confidence shaken, his first touch betraying his nerves.

The second half continues similarly until I put on Anthony Elanga as an attacking center forward. With his pace, he’s getting behind the massed Spurs ranks and now we’re starting to create good chances. He should break the block as he smashes through the lines and praises Hugo Lloris, but the ball bounces off the bar. Luckily there is still time. Leon Bailey, as exhausted as everyone else, shoves a pass from the right, Sesko squeezes past the defense and his shot hits a post, rolls down the line, hits the other post and dribbles home. Well, they all count. 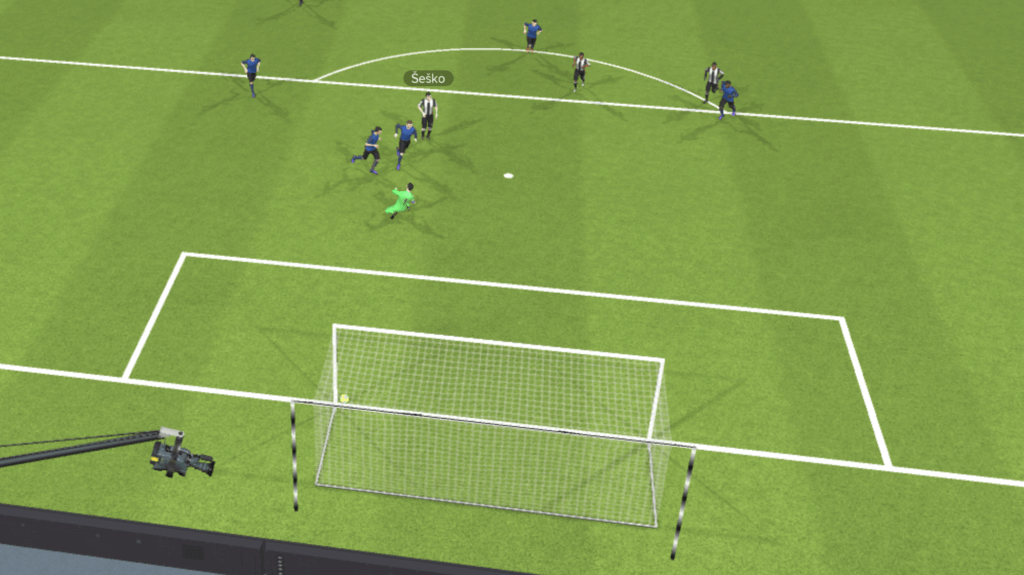 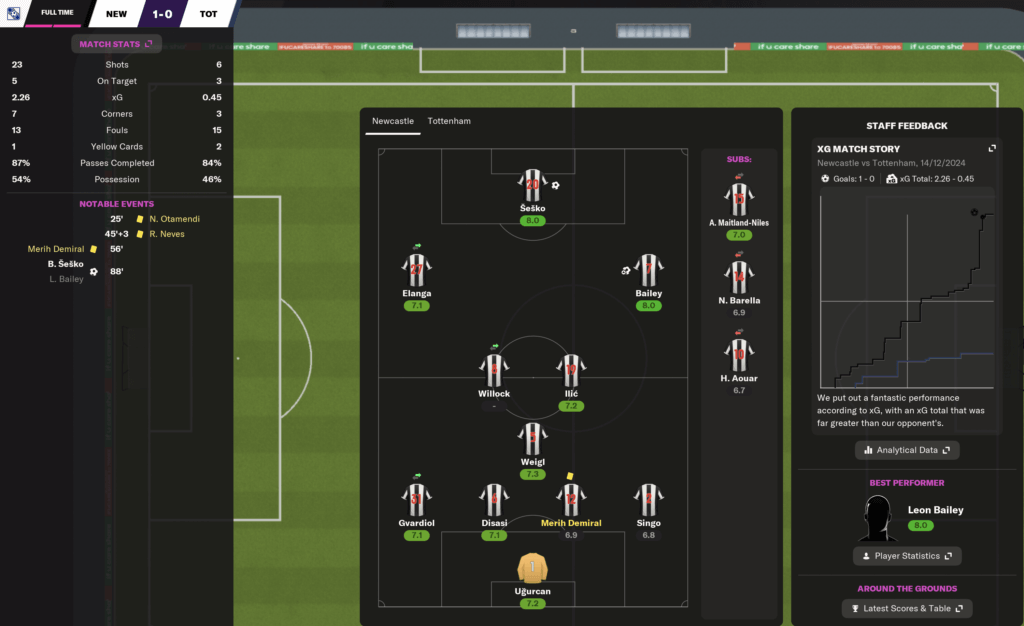 Brendan Rodgers’ Leicester perform their legendary party tune once again; He threatened the Super League Splitters with humiliation before inevitably disappearing in the second half of the season. Unfortunately, it’s still the first half of the season for us. I’m without a cold-stricken Singo and exhausted first-teamers Merih Demiral and Sesko. And that’s the first of four games over the next nine days. I really think we could use a winter break, it’s all self-defeating. 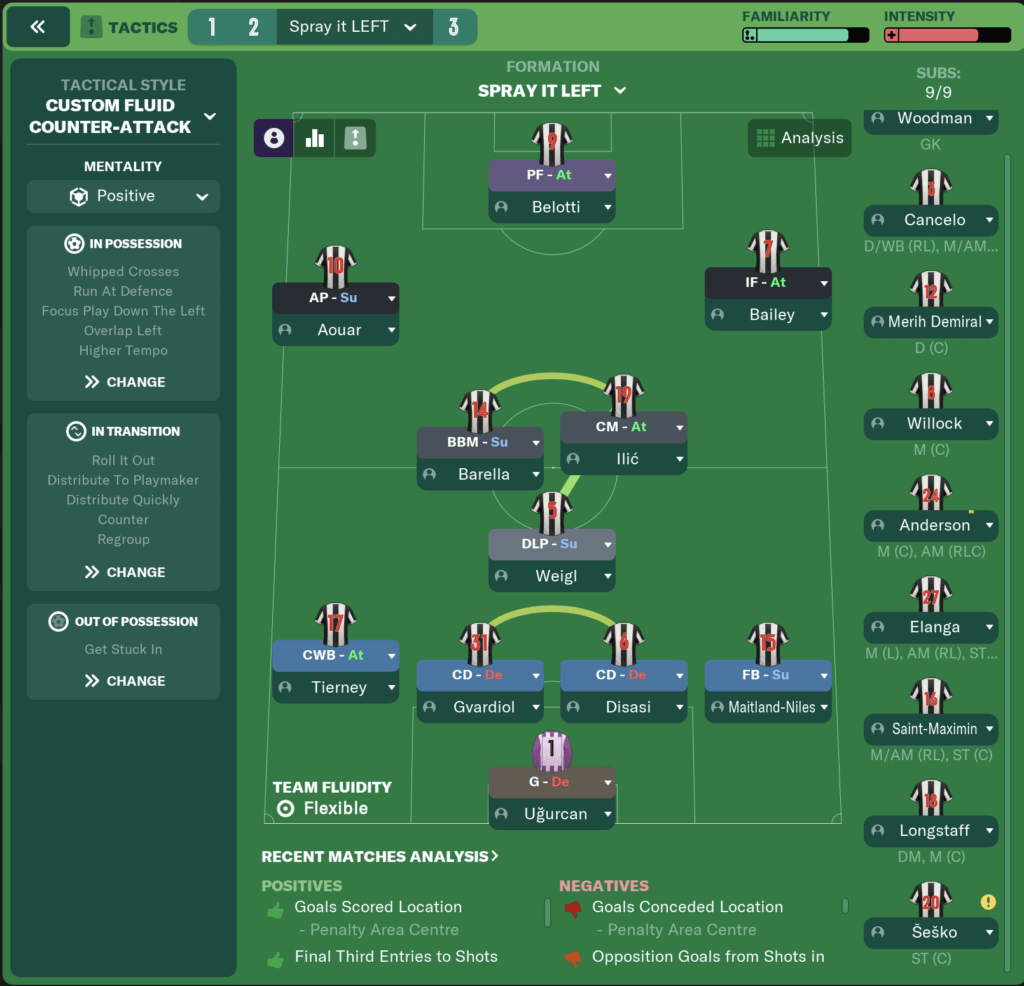 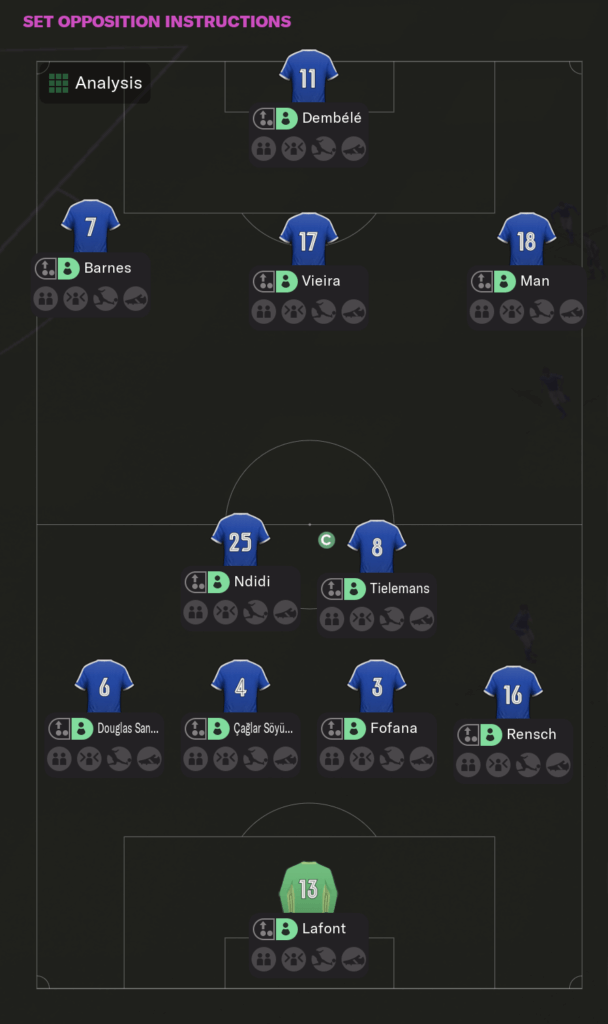 It takes three minutes for two important things to happen: first, I realize I’ve got Nicolo Barella and Ivan Ilic wrong, and second, Wilfred Ndidi scores a header from a corner at the far post. This starts a trend.

We react well, we pass through to Leicester and we equalize when Kieran Tierney crosses from deep and Belotti heads home from the far post. So far, so good. And now to victory, right?

Not correct. It’s one of those weird games where there’s no dominant force, there aren’t great odds, there’s just two teams playing at pretty much the same level, and it could go either way without causing controversy. Annoyingly, things are heading their way as Moussa Dembele steps up to head home, yes, at the far post. We have nothing left in the tank, the game ebbs and to add to the insult there is an injury when Belotti is carried away in stoppage time. It wasn’t a good day at the office. 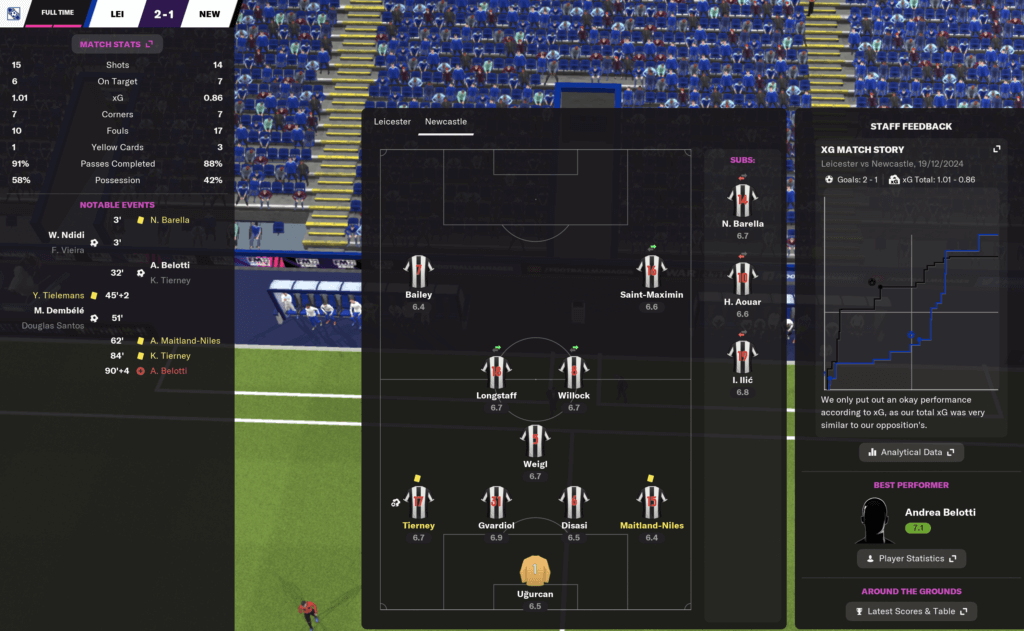 With only a three-day break, I’m forced to replace almost the entire squad again, with the exception of Jools Weigl, for whom there is no natural replacement. It’s West Ham at home and we really need something here. The problem with inconsistencies is that it’s very easy to get a bad run. For example, let’s say if you have to play three games in seven days. 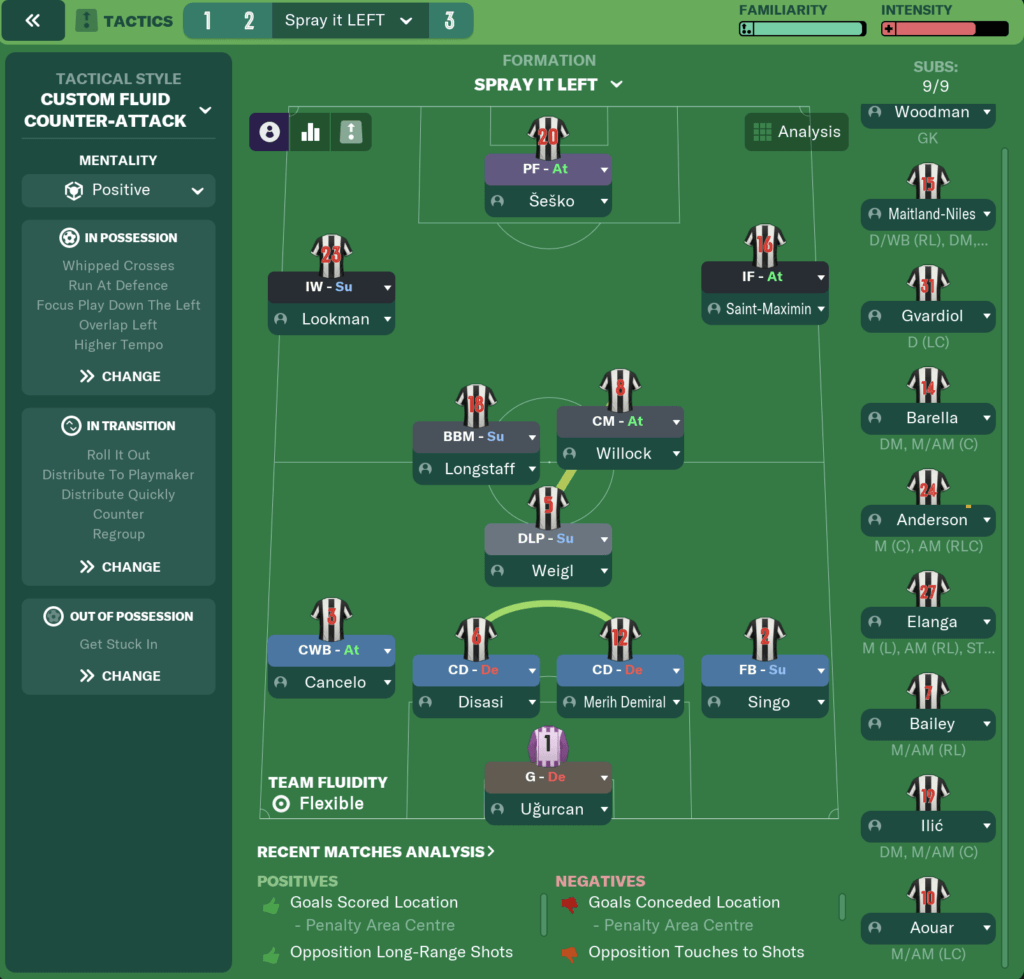 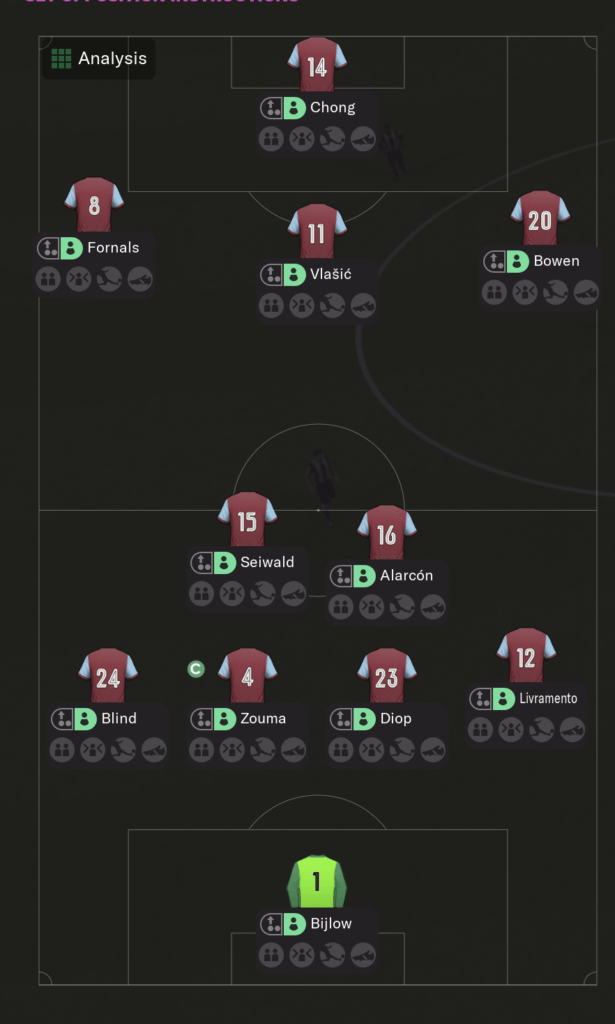 However, West Ham are surprisingly gentle and do us no harm. Unfortunately, we don’t do much ourselves. We’re very much into one of those spells where we dominate games without worrying the opponent. I try to keep the spirits up during the break by telling the players they’re fine, but even they don’t believe it and they all seem pretty discouraged by my optimism.

But I’m right. we are playing well and five minutes after the break my confidence is confirmed. Ademola Lookman plays a skillful ball along the edge of the box and Allan Saint-Maximin gets in the goal to put a shot in the bottom corner. West Ham have no answer for that and when Sesko rushes on a pass and doubles our lead we throttle and shut down. 2-0 We needed that. 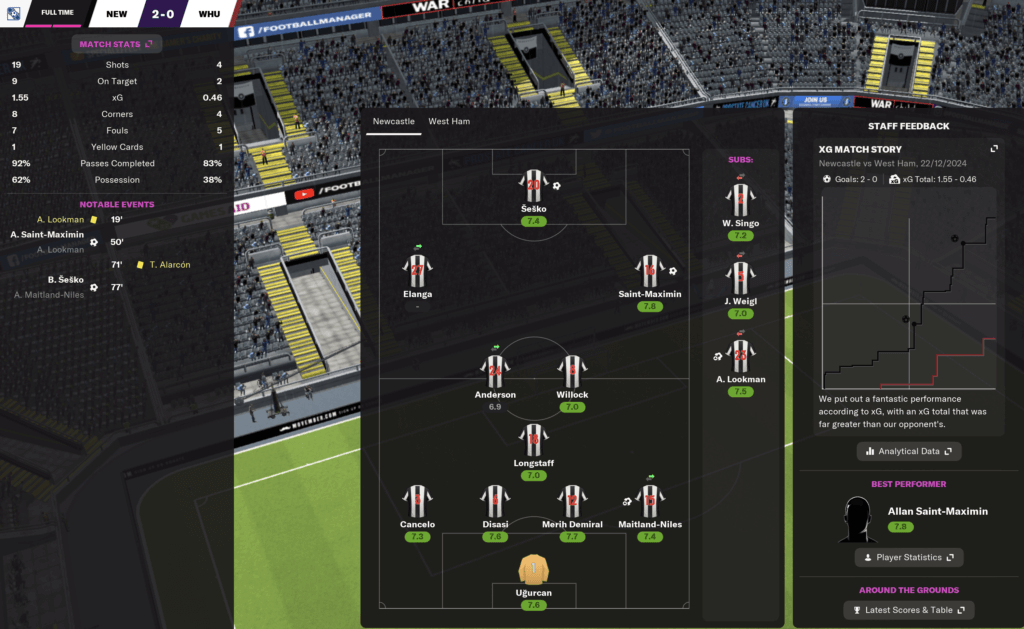 Norwich’s faith in Daniel Farke has definitely paid off. As they were relegated in 2022, the Canaries resisted the urge to do something stupid like sack a man who had already promoted them twice and instead allowed him to rebuild without pressure. Not only have they returned to the first division, they have consolidated and whatever else happens, I don’t think they will be in a relegation battle this year. So I’ve tried to time the rotation so that we get as close to a full strength side as possible. However, there is one notable problem: with Belotti injured and Sesko pleading for a day in bed, we have to play up front against Elanga. 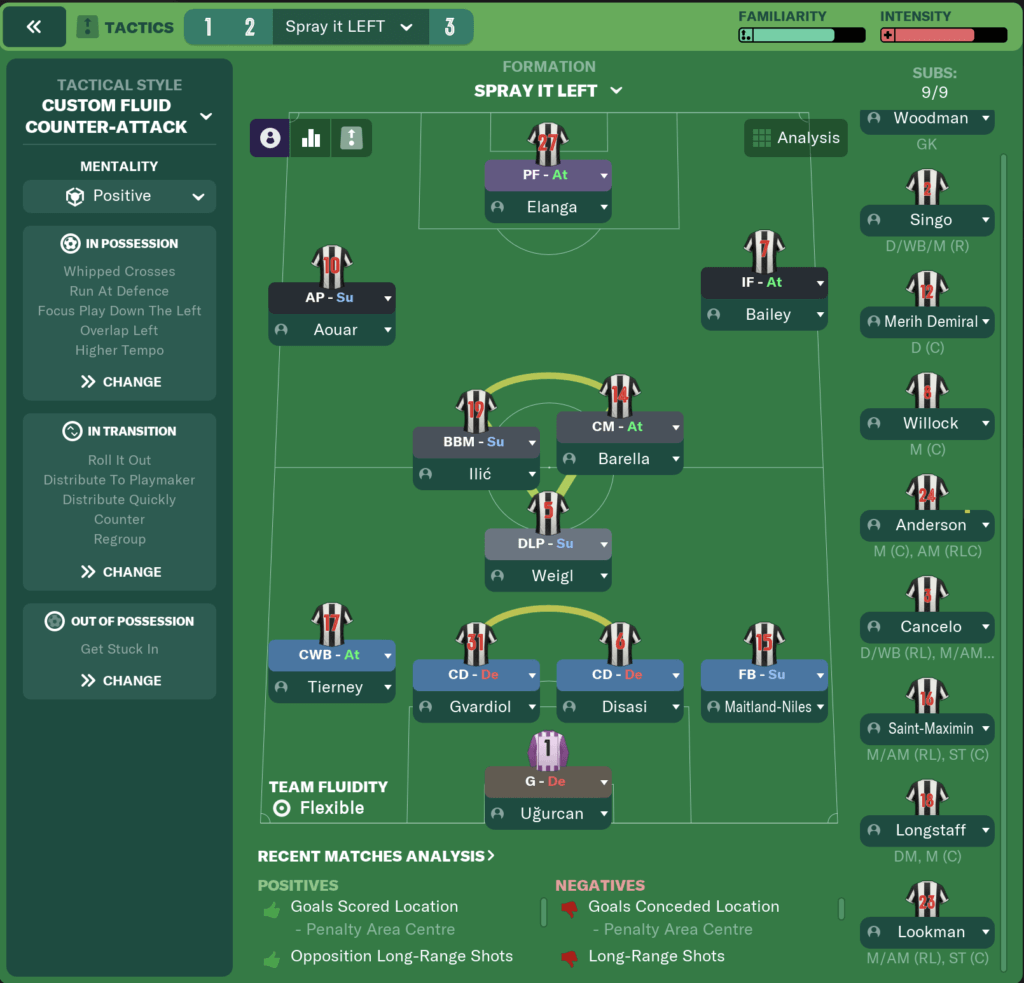 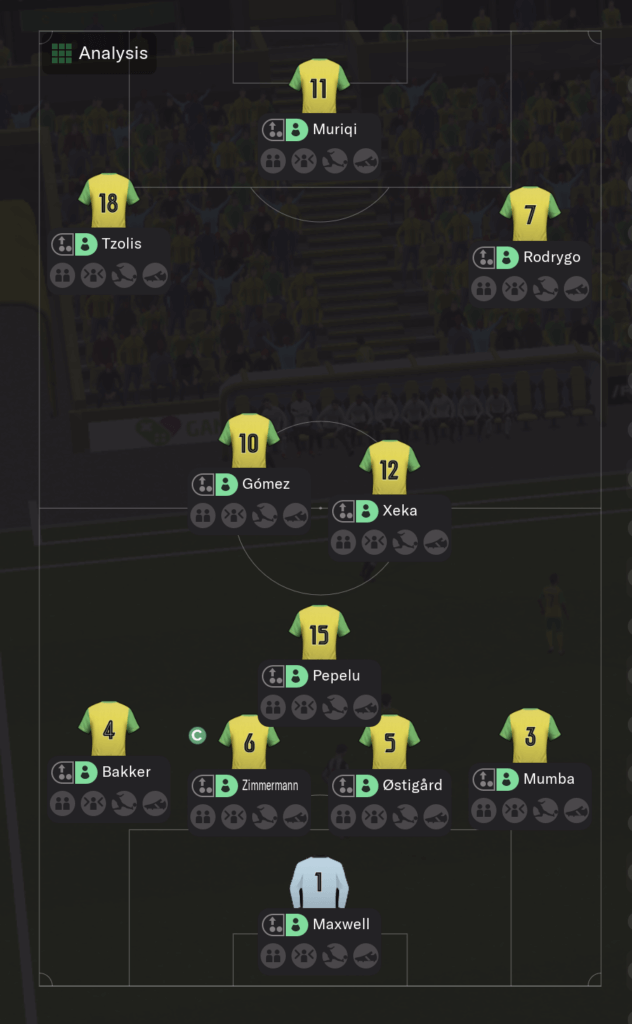 Sometimes this sport feels like it’s going to get you, and other times, very rarely, it seems intent on doing you a favor. Norwich is in a generous mood. After ten minutes Christoph Zimmermann goes straight at Saint-Maximin with bared teeth and studs and they are reduced to ten men. Then Elanga is bundled across the box, his only notable contribution to the cause, and Barella steps forward to convert from the point.

But I am not mistaken. We’re playing badly and I’ll tell them that at half-time. Obviously they don’t believe me. You finally get the hint when we don’t clear a set piece properly and Xeka shoots one absolutely into the top corner from 30 yards.

Now we’re playing with a bit of urgency, but time is running out. Elanga, withdrawn and filed under “Let’s never talk about this again,” stalks off. Lookman takes his place. And I really should have played Lookman from the start. He’s mischievous where Elanga is lazy, he’s smart where Elanga is dense, and critical when given a late chance he actually scoops it. Norwich still have us under pressure at the end, which is appalling, but we’re persevering. We’re halfway through the season and we’ve got 39 points, which overall is perfectly acceptable. 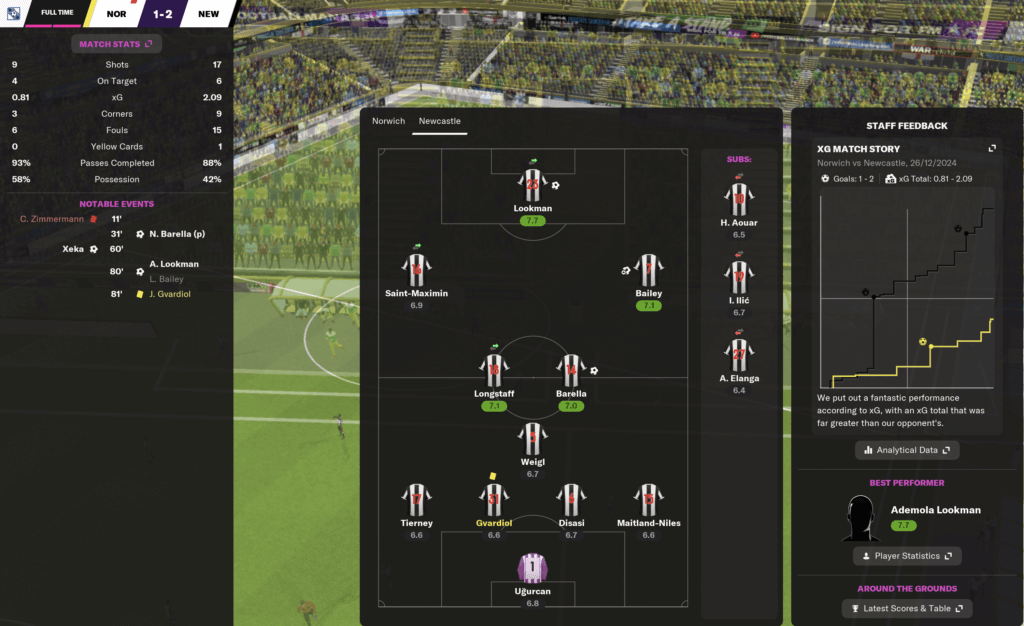 The year 2024 is drawing to a close and we’re hobbling and panting across the finish line. There are no selection headaches in this existence, we just try to find 11 people every two to three days who can last 90 minutes and hope it all works out. But everyone is like that and I hope that what we lose in cohesion we gain in superior fitness over teams like Fulham who probably don’t have 22 players of decent quality. But like I said, it’s just a hope. 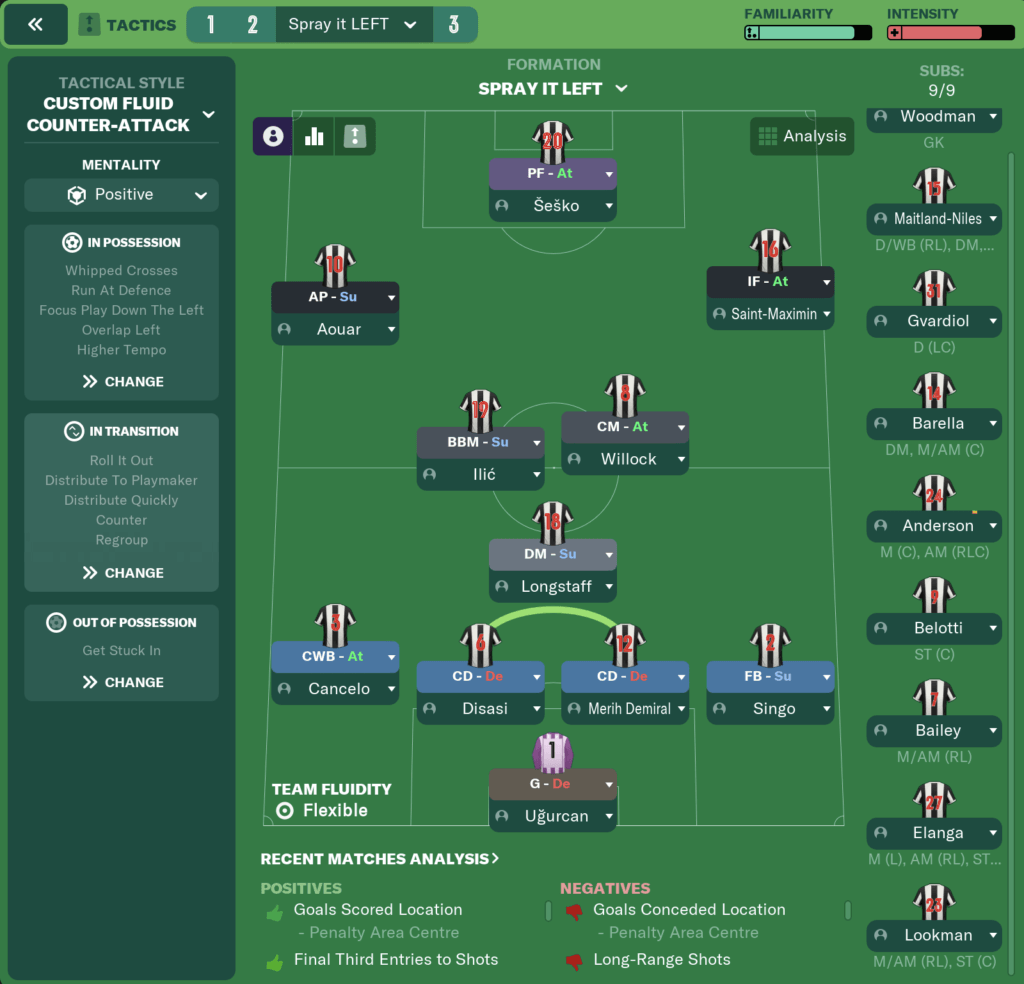 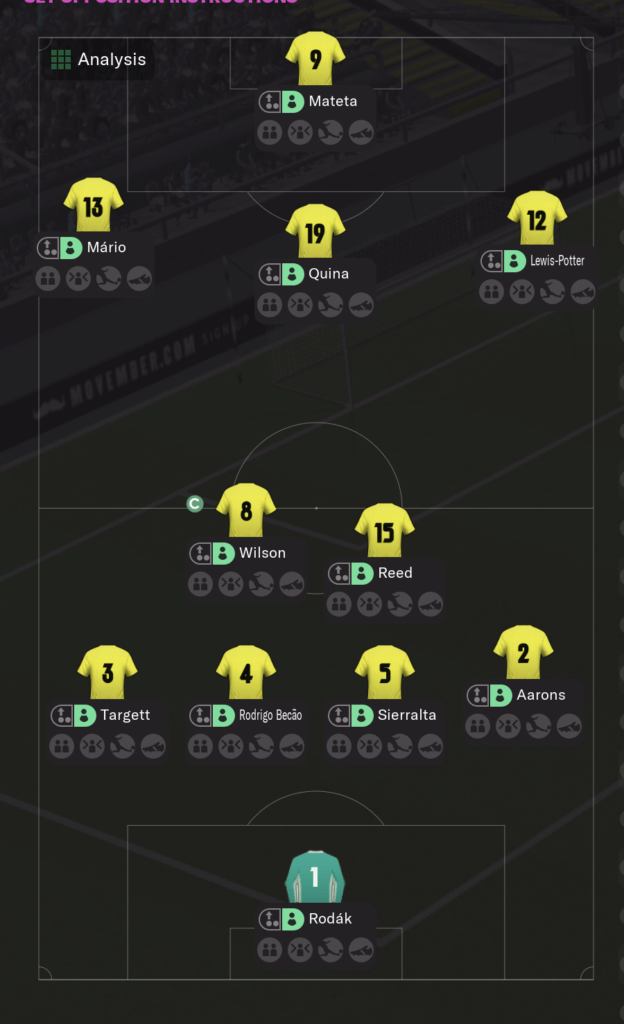 And it’s a lost hope. Fulham look remarkably fresh all things considered and they are sharper than us on everything. Indeed, it’s a bit of a surprise when Saint-Maximin intervenes and converts a through ball from Ilic to give us the lead. Jean-Philippe Mateta’s equalizer on the hour restores balance to the universe. Fulham are in control and we’re losing our footing. I reverse formation, freeing Singo and working the right flank instead of the left. And after that single decision, the entire game changes.

Suddenly we create space. Substitute Elliot Anderson releases Joe Willock to put us back in front. Saint-Maximin causes chaos and feeds the last longstaff standing for a third. And this seems like a very good time to end the game and get the points.

We ended the year with three wins in three games. We’re in the title race. We are in the knockout stages of the Champions League. And yet I feel uncomfortable. Like an old fisherman who suddenly senses a change in the wind and knows at some basic, primal level that it would be now Yes, really good time to return to shore. What is it? 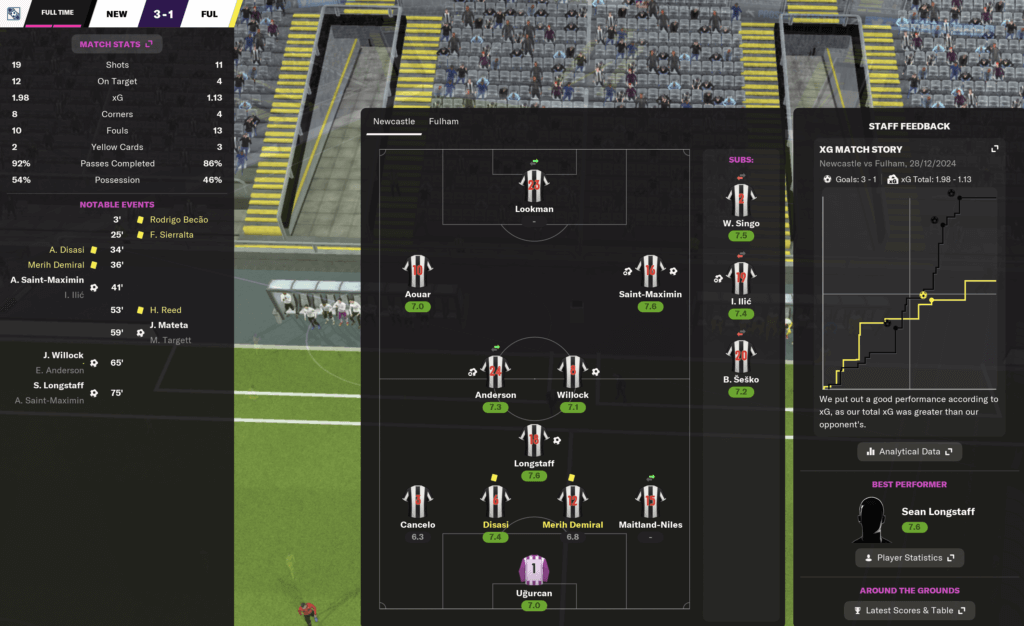 That feeling follows me through the press conference and back to my office that evening, nagging at myself. I decide to take positive action. I open the liquor cabinet and carefully remove the single bottle of Scotch sitting amidst a Malibu crowd. I pour a healthy portion into an oversized Sports Direct mug and sit back at my desk. I’m about to take a sip when the door swings open.

“I want to talk to you,” says Amanda Staveley. 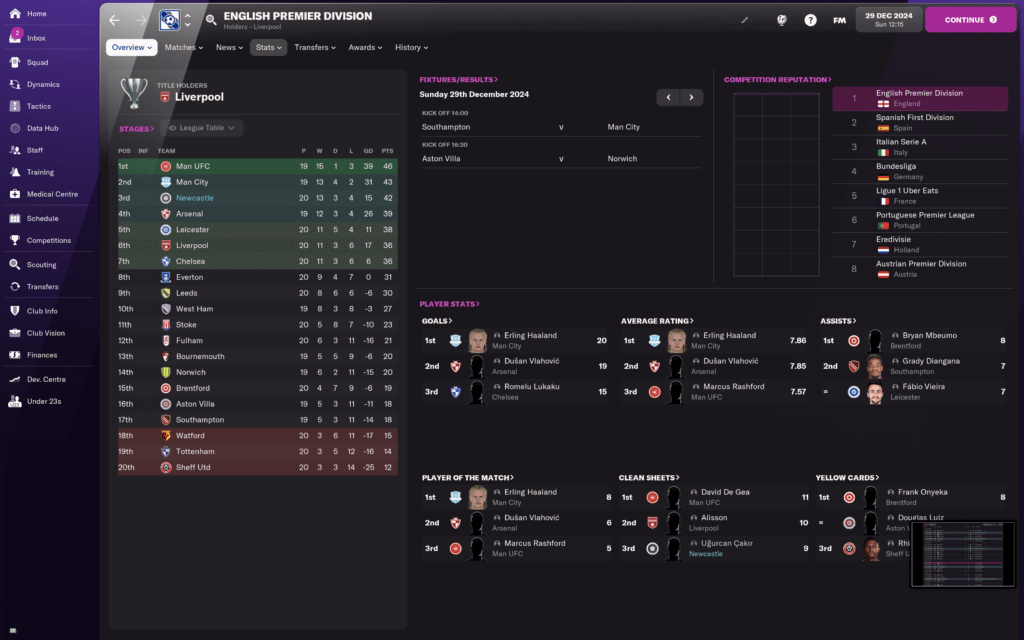 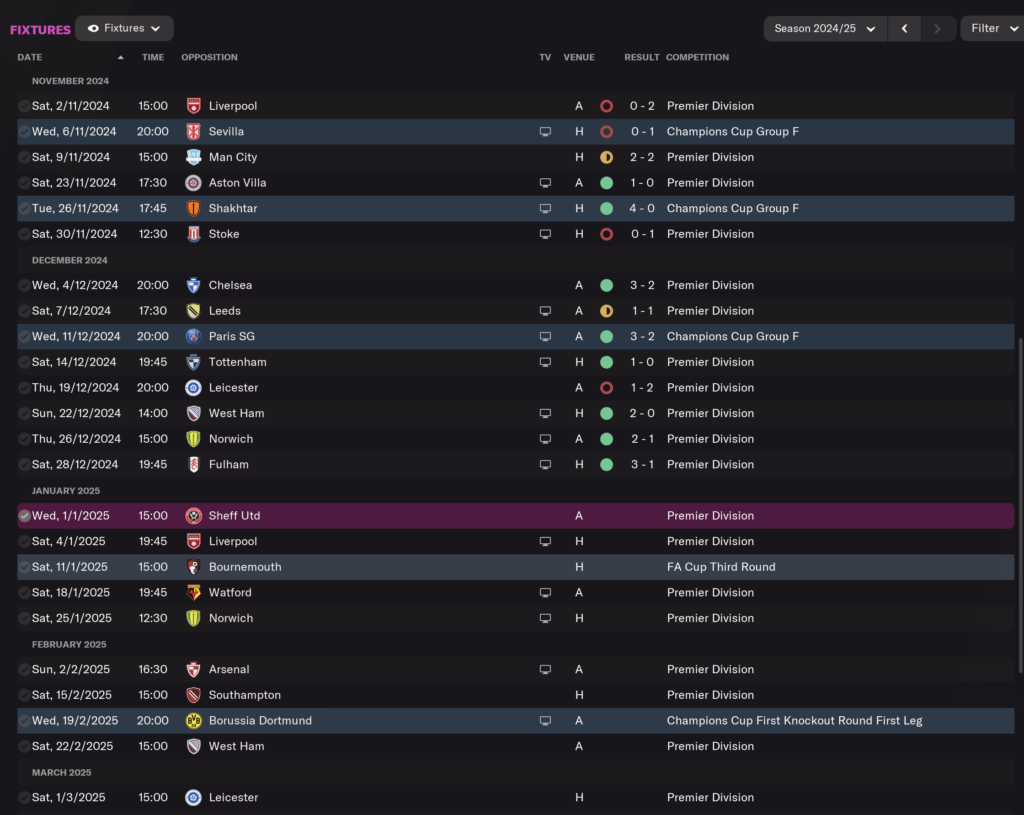 Want more about FM from Iain and his team? Watch his podcast – The Football Manager Show sponsored by Livescore – for free on Apple, Spotify and all major podcast platforms and, of course, ad-free on The Athletic.