A silent understanding at the Dispatch concert 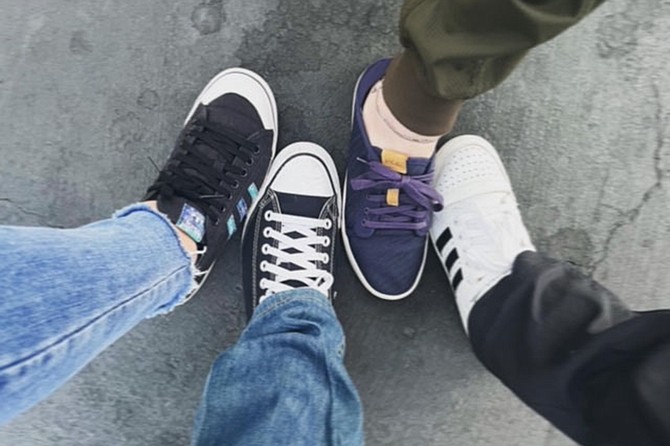 Sneakers – for sneaking, of course.

We were in the college area Eureka before the game! nearby when Whittney told Blue she was going to steal the table knife. Four of us were gathered around a table in the campus restaurant, trying to empty our pints as quickly as possible before the show. Ashley and Michelle had arrived late because Sunday work had taken up their day, but we were finally together, just in time to see indie rock band Dispatch play at the Open Air Theater on SDSU campus.

“Don’t take that stupid knife,” I said to Whittney Blue, “it looks like a butter knife on steroids.” She agreed to put down the weak blade. Dispatch was due to play the Belly Up Tavern in November 2021 before two sold-out shows were canceled due to another vexing Covid wave. Known for being the best band you’ve never heard of, they have maintained their independence from the corporate music world since forming in 1996. That night’s SDSU engagement marked her first appearance in San Diego since an August 2018 appearance at the same venue.

After exiting the restaurant, we found the entrance to the theater. Before going in we decided to find a place to smoke. The problem was that no one had a lighter. We asked a few college kids but no luck. “Kids just vape these days,” I grumbled. Finally, a friendly elderly gentleman sitting on a bench nearby happily let us use his pocket fire. “You know smoking isn’t allowed on campus, but I got you,” he said. God bless this man.

As we neared the venue gates, Whittney Blue reached into her purse and pulled out something shiny. “I can’t take that, can I?” She laughed, brandishing the big butter knife.

“You took the knife? Go throw it out, you maniac!” I replied, pointing to a nearby trash can. I wouldn’t be refused entry to a show by one of my all-time favorite bands because of a butter knife. She giggled as she threw it in the trash. “Can’t take you anywhere,” I giggled. Completely disarmed, we passed the metal detectors without a beep.

Our upper-level seats offered a decent view of the stage, but that wasn’t enough. A sense of determination washed over me as we watched fellow indie rock band OAR open the show. “We have to go forward when the dispatch comes,” I said to the others. “If OAR goes off stage and people go to the bathroom, we’ll sneak downstairs.” The plan worked smoothly, or so I thought. I went first and the rest followed. It wasn’t until I got to the front that it turned out that only Ashley had made the whole journey with me. Whittney Blue and Michelle got lost somewhere along the way. I haven’t seen her since then.

Ashley and I watched as the band’s roadies began swapping one gear for another under the neon blue stage lights. They showed the work ethic of Oompa-Loompas perched atop a college kid’s non-prescribed Adderall, they had the stage set up real quick and we were all in it. First row. We made it. We lost a few good women in the trenches along the way, but found our way to the target zone. I turned to look at the crowd to see a full house – lots of meat on the seats. I think some people to have heard from them.

But then almost as soon as Dispatch took the stage and started broadcasting their music to the crowds, security approached and demanded to see our non-existent bracelets. I quickly showed my right arm, the one with a “BEER” stamped on the inside wrist, in a sad attempt to get the guard to leave us alone. It was all I had and it wasn’t enough. We were told to return to our seats. As we walked up the steps, I told Ashley I was going to catch up with her. I stopped somewhere in the third row, turned, and listened to a few dispatch obstructions while the guard kept a wary eye on me. There seemed to be a silent understanding between us. I would behave and he would leave me alone. Only when he turned away for a moment did I duck into the crowd and disappear back into my assigned seat, leaving the poor bastard confused in his victory.