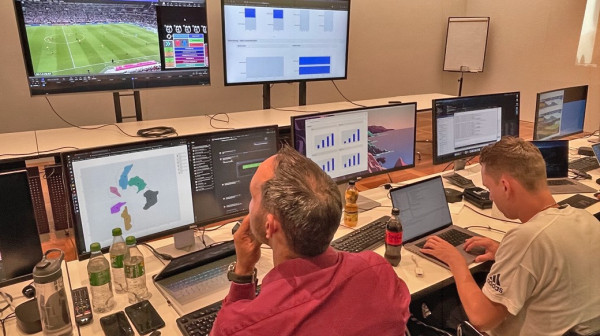 FIFA’s Football Performance Analysis & Insights team (www.FIFA.com) has developed new statistical tools that enable real-time match analysis; The tools were tested at the Qatar 2022 intercontinental play-offs; Extended metrics can be made available 30 seconds after a game event has occurred

The intercontinental play-offs for the FIFA World Cup Qatar 2022™ kept fans of the participating teams in suspense and were also closely followed by the FIFA Football Performance Analysis & Insights team.

Led by Ulf Schott, Head of FIFA’s High Performance Program, and Chris Loxston, Group Manager of FIFA’s Football Performance Analysis and Insights team, a group of engineers have developed a set of metrics that will be used at the World Cup later this year.

Despite being beaten respectively by Australia (5-4 on penalties) and Costa Rica (1-0) in the play-offs, Peru and New Zealand can at least find some comfort in having played their part in this important technological development.

The new data, including line breaks, pressure on a ball carrier and when a team loses the ball under pressure, will be made available live to stakeholders – including broadcasters, fans and app users – during matches and can help explain the situation a team’s playstyle and add context to match results.

EFI Metrics are designed to improve the flow of live monitoring and match event data, which is sent directly to the FIFA database in real-time from external providers. The data is then passed to models and fed into algorithms that calculate the results. These are sent back to the FIFA data hub, which then distributes the EFI metrics to all stakeholders within 30 seconds of the event.

“The games were a successful proof of concept for our Enhanced Football Intelligence infrastructure,” said football data engineer Sirius Saberi. “The processing time of the metric insights, i.e. the time from the first receipt of a message from the provider feeds to the sending of the insight, was less than two seconds on average.

“The entire process – from pitch to our external vendors to screens – takes less than 30 seconds for event-based metrics. This allows us to show relevant insights at the right time, thereby creating a new, improved experience for football fans and other stakeholders.”

While the speed of computation, analysis, and dissemination of the data is a remarkable feat in itself, timing disclosure during a match is still critical. At Qatar 2022, two highly qualified and experienced analysts will be tasked with deciding when to announce certain dates and metrics in line with the events taking place on the pitch at any given time.

Last week’s two playoff games at Doha’s Ahmad Bin Ali Stadium enabled real-time testing of the process. “The goal of the data science group was twofold,” said soccer data scientist Juan Pablo Busso. “First, to evaluate how the algorithms running the EFIs performed in a live environment. Second, we also rehearsed the interaction between the data scientists and the football analysts to evaluate the most relevant EFIs and make data-driven assessments to best demonstrate the teams’ performance during each game.”

In the coming months, FIFA will release videos explaining how these new technologies are used and what they add to football analysis and understanding of the game.

Distributed by APO Group on behalf of FIFA.

This press release was issued by APO. The content is not monitored by the African Business editorial team and the content has not been reviewed or validated by our editors, proofreaders or fact-checkers. The issuer is solely responsible for the content of this announcement.