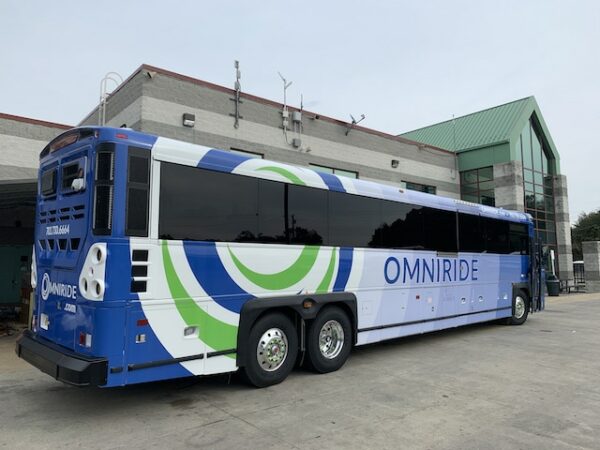 OmniRide will hold a series of public hearings to discuss new bus service into the Reston area along the newly expanded Metro Silver Line and the cancellation of a route.

The public sessions will take place on August 15th, 16th and 17th.

OmniRide aims to offer a new bus service to the Reston area. Here are the details:

Route 608-Manassas-Reston: This new commuter service will operate in the main direction of traffic between the Balls Ford Road commuter car park and the Reston area on weekdays. Areas to be covered include the Silver Line Innovation Station, several work sites and the United States Geological Survey. This route would allow connections with numerous Fairfax Connector routes to travel to other areas of Fairfax County. The morning service ran every 30 minutes from Balls Ford Lot between 5:20am and 8:30am. The afternoon service would operate every 30 minutes from the United States Geological Survey from 3:35 p.m. to 6:05 p.m.

The commuter bus system seeks to eliminate the 601 bus between the Portsmouth commuter park near Manassas and the Department of State and Department of Agriculture in Washington, DC

601-Manassas-Washington, DC Express Line: This route should be deleted. Drivers would instead use Route 611, which would serve the Cushing Road commuter lot and the Balls Ford Road commuter lot, using the direct access ramp to the new I-66 express lanes. Additional rides would be added to Route 611 buses to accommodate Route 601 drivers.

More trips would be added to the 611 bus to accommodate additional drivers.

Route 611 Gainesville Washington. direct current: Additional trips are suggested to accommodate Route 601 drivers. Route 611 would serve both the Cushing Road and Balls Ford Road commuter parking lots as the last stops to use I-66’s new high-speed lanes. Buses would run every 20 minutes between 4:45am and 8:25pm. In the afternoon, the first trip would leave DC at 12:10 p.m. and the last trip would depart at 6:30 p.m.

OmniRide is proposing changes to the 602 bus between Manassas and the Pentagon to remove the Portsmouth Commuter Lot stop.

Route 602 Manassas Pentagon: It is proposed that the route will no longer serve Portsmouth commuter car park. Instead, the service would operate between the Balls Ford Road commuter parking lot and the Pentagon using the fast lanes of I-66. Additional rides would be added, taking advantage of time savings from the new express lanes. Route 602 buses ran from the Balls Ford Lot every 30 minutes between 4:40 a.m. and 8:10 a.m. In the afternoon, buses would depart from the Pentagon between 12:45 p.m. and 7:20 p.m.

OmniRide is also proposing changes to the local and Metro Express buses serving the Manassas area:

Subway Express Line 60: The proposal is to increase service so that buses run both ways throughout the day between Manassas and the Tysons Metrorail station. Direct service to the Manassas Mall would be restored. The route would also serve the new Balls Ford Road commuter parking lot with direct access to the express lanes of I-66. Operations would be restored on Route 28 between I-66 and downtown Manassas. The first ride would leave the hub at 4:08 a.m. for Tysons Corner. The last ride would leave Tysons Corner at 8:18 p.m. During rush hours, trips ran every 30 minutes.

Subway Express Line 61: The service is to be reorganized to operate as a commuter shuttle connecting the University, Limestone and Cushing commuter car parks. Existing bus stops along Linton Hall Road and Devlin Road would be served. The bus would also serve the new Balls Ford Road commuter car park. Buses would run every 45 minutes from the Limestone Lot between 4:15am and 8:00am. In the afternoon, buses would depart from the Balls Ford Lot at 1:30 p.m., with the last trip departing at 8:45 p.m.

route 65 – Manassas North: It is proposed to increase the core service frequency so that buses run every 45 minutes instead of every 90 minutes. The service would work in two branches:

Route 65N would operate between the western hub and NOVA-Manassas. Direct access to the Manassas Mall would be restored. Portsmouth commuter car park would be served. Service along Irongate Way would be eliminated.

Route 65B would operate between the western hub and the new Balls Ford Road commuter car park. Buses would serve the Manassas Mall and residential communities along Coverstone Drive west of Ashton Avenue.

route 67 – Manassas South/Manassas Park: Hours of operation will be extended to accommodate Route 65N. Euclid Drive would no longer be served by Route 67. Instead, buses would run along Liberia Avenue to Portner Avenue to Breeden Avenue to Mathis Avenue to Manassas Drive. Route 67 would follow regular routing once on Manassas Drive.

OmniRide is also proposing several changes in eastern Prince William County on routes in Dale City. You can click this link to view the proposed changes.

OmniRide offers commuter and local bus service to Prince William and Stafford counties, as well as the cities of Manassas and Manassas Park.