The Home and Home series is something CFL fans know well. It ran through the 2021 CFL schedule (in a pandemic-altered season, mind you) and we last saw it with the Saskatchewan Roughriders and Toronto Argonauts in Weeks 6 and 7. This week the Winnipeg Blue Bombers have their 8-0 record on the line in Montreal against the Alouettes and then all head west a week later to do it again at IG Field.

However, what we’re about to see with two classic CFL rivals is bigger than that.

On Saturday, the Hamilton Tiger-Cats (and some of their devoted fanbase) will hike up the QEW to take on the Toronto Argonauts at BMO Field. It’s the first of four (FOUR!) meetings between these teams over the next five weeks.

If familiarity breeds contempt, we should hit that mark by the end of the week 10 outing at Tim Hortons Field. At the end of Week 13, with 240 minutes of on-field aggression between these two clubs, we could have lifelong grudges at Wrestlemania and proclamations of scores settled at Wrestlemania.

When the debris clears this interesting stretch of track on schedule, the East Division may look very different than it does now. Don’t forget that Hamilton sees Montreal twice during and around these four Argos-Ticats meetings. If you thought the east was hard to find at this point in the season, just wait. It’s about to get a lot harder. 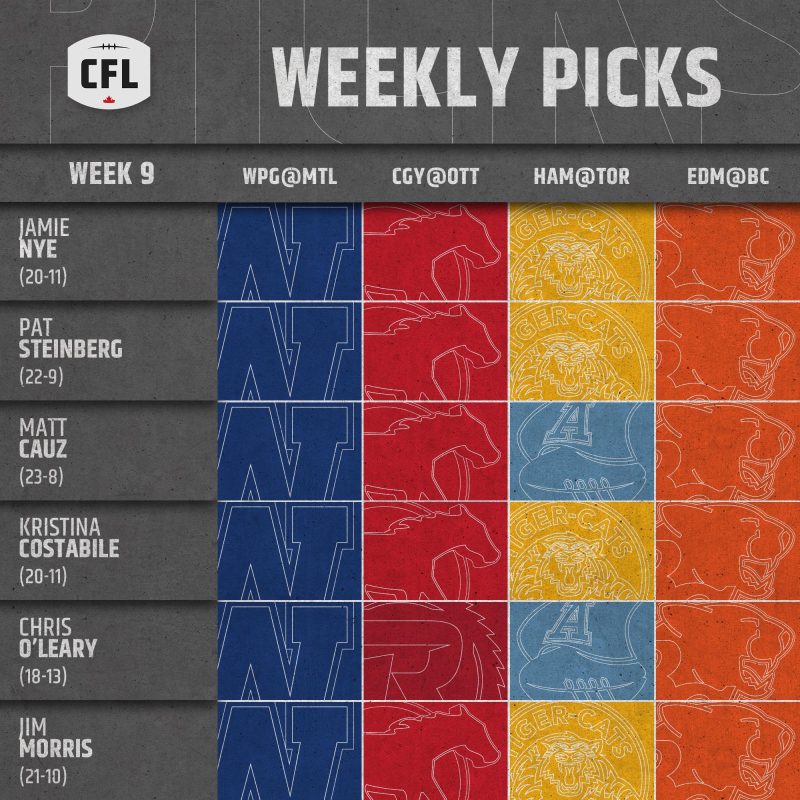 Here’s some food for thought against the grain: all strands come to an end eventually, right? While the CFL.ca writers learned their lesson about picking the Bombers a few weeks ago, you’re wondering if the Bombers are a little vulnerable going to Montreal, where the Alss clinched home wins against them in 2019 and 2021 (Winnipeg rested its starters late in the season). Add that the Bombers still have a bye week and fatigue could be a factor as they attempt to top the table for the first half of their season. Food for thought: It’s very difficult to fight back against a team that has found a way week in and week out this year.

Maybe it’s the similarly colored uniforms, or some sort of cosmic soccer force bigger than all of us at work. Regardless of the type of season both teams are having, the Stampeders and REDBLACKS have almost always managed to put together excellent games when they come together. We hope this week’s meeting at TD Place is no different. Caleb Evans has settled in well in the QB over the past few weeks and the REDBLACKS’ defense was impressive as they eliminated the Argos’ running game. The challenge gets steeper this week against Bo Levi Mitchell and the Stamps, slowed only by the Bombers this year. A brave soul on our panel believes the REDBLACKS are up to the challenge.

As you envision these teams lining up like the dancers in Michael Jackson’s Beat It video at the start of these four games in five weeks, the Argos and Ticats will try to keep their moves similarly sharp and accurate. The Ticats’ tendency to lose the ball has garnered a lot of attention this season, but the Argos are spot on in terms of turnover ratio (-10 Toronto, -12 Hamilton) and fumbles lost (Toronto eight, Hamilton 10). correct. It’s a simple narrative for this upcoming series, but the team that’s more careful with the ball will likely be the ones that come out on top. The majority of writers think this week is about the Ticats.

Returning to the scene of their defeat in Week 1, the Elks are looking for a different result this time. Edmonton is getting healthier but is struggling against a Lions team that only lost to the Bombers and is 3-1 at BC Place. The Elks are a much-improved team since their first trip to Vancouver. It should be interesting to see what Chris Jones comes up with to counter Nathan Rourke, who shook off a very good Roughriders defense in Week 8 to make 81.8 percent of his passes in their win at Mosaic. The selection panel thinks Rourke and a very complete Lions team will be back at home too much this week.