Carlton Daniel Jr. G’16 fell in love with filmmaking at an early age. Raised in Ohio, he spent much of his childhood at the local movie theater, browsing videos at Blockbuster, and dissecting films with his family. His passion for film took him from writing and directing short films to developing his first feature film. 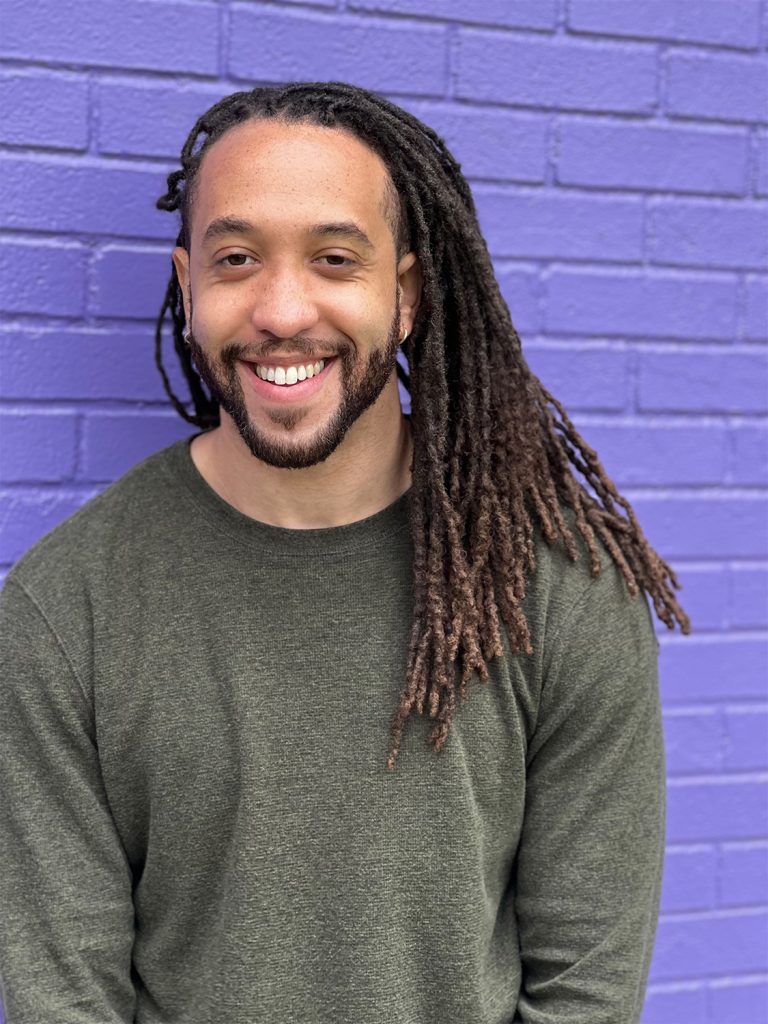 After receiving his bachelor’s degree from Ohio University, he applied to the College of Visual and Performing Arts. Syracuse reminded him a lot of his hometown of Cleveland. He saw this small-town community as a place that would nurture his artistic voice much like his Ohio roots. Daniel chose the MFA film program because it offered him a flexible environment to hone his craft as a writer and director.

“I really admired the interdisciplinary approach offered at Syracuse. I was able to study disciplines outside of film that influenced my storytelling, which I think made me a better writer and director,” he says.

His 2017 graduation film and directorial debut, Monogamish, explores identity, love, and relationships as an openly gay black man through narrative filmmaking. The film was shown at more than 20 national and international festivals.

“I arrived in Syracuse just a few months after the shooting of Treyvon Martin. The courses I took in the African American Studies department while learning the history of Rust Belt cities like Cleveland and Syracuse were really insightful,” says Daniel. “Understanding how population shifts and institutionalized racism like Redlining affected my communities, and learning from Associate Professor Kishi Ducré about the impact of residential segregation, inspired me to create stories to engage with some of these issues.”

“Syracuse was the foundation for me to really find my voice in who I am as an artist and what I want to say to the world. It all started here,” he says.

These studies fed into his second short film, Homegoing, to be completed in 2020, about the story of a mortician’s son who balances the hardships of hypermasculinity, the wealth gap and the everyday realities of black American life . The short screenplay won the first short film competition in Central New York and raised $40,000 for the project, which was shot entirely in Syracuse with local cast and crew. Since then, the film has won spots at highly competitive film festivals across North America, including the American Black Film Festival, Outfest LA, and Palm Springs Short Fest.

Most recently, Daniel wrote, directed, and co-produced a horror film for 20th Digital Studio, Rebecca, which is currently streaming on Hulu as the second season of Bite Size Halloween.

“I want to continue writing and directing films and creating opportunities for people from underrepresented communities to have access to film sets to learn more about the different opportunities that filmmaking offers,” says Daniel. “There are so many jobs on set that people don’t even know about. I want to be able to give something back to Syracuse and Cleveland so young people can feel empowered to make films and tell their own stories.”

Daniel is now developing Homegoing into a feature film with creative partner Evan Starling-Davis G’20. Both the short and feature film scripts were inspired by his experiences living in the Rust Belt.

“After graduating from Syracuse, I temporarily went home to Cleveland and started working at a funeral home. It was just a job to make money but I was so moved and inspired by the family who owned it and the community I met each day as they came to mourn loved ones. I was just shocked at how much love, joy and community there was in that room. I’ve only dealt with these small pieces of life and I wanted to make something out of it that was heartfelt and personal,” says Daniel.

Daniel draws inspiration from his own experiences, overheard conversations and conversations he recorded with his late grandmother at home. “I take these things and turn them into notes and journal entries and create character descriptions, arcs and storylines.

“I force myself to do it because I feel like if I’m uncomfortable talking about it, it’s probably going to help someone else — something that others can relate to.” I really challenge myself to step out of my comfort zone when writing and speaking about things that aren’t easy. It’s not even always serious, sometimes even comedic moments that come from really tough places.”

“The main character in ‘Homegoing’ is plagued by nightmares and returns from college to his family’s funeral home to break free from reality. Along the way, he reconnects with his grandmother, learns more about the business, and also learns about his family history, his identity, and how the family immigrated to Cleveland from the South in the 1940s. The main character begins to realize that greater forces – spirituality – are at play to keep him at home. In doing so, he has to come to terms with his family, his community and the man he loves.”

Daniel’s screenplay was selected for Outfest Screenplay Lab in Los Angeles. “I spent two weeks with writers and film industry executives, receiving script feedback and mentoring from professionals,” says Daniel. “The screenplay was selected shortly thereafter for the Tribeca Film Festival’s Untold Stories grant competition, where it placed in the top five projects and received a $10,000 constellation award. ‘Homegoing’ has since made it to the final round of consideration for other incubation programs, including the Sundance Creative Producing Lab and the Sundance Development Track.”

Daniel is now undergoing an audition and is seeking funding from private investors to develop Homegoing. As a young, promising graduate of Syracuse University, he also wants to strengthen his network and the support of the alumni community.

As a filmmaker, Daniel seeks to address issues that are important to the next generation. “It’s really moving when I get feedback from other people – especially other young people – who just felt moved or inspired by something I’ve written or directed. Being an artist is really powerful in that sense. Filmmakers reach such a wide audience. Hopefully my films and the stories I tell make a little impact on the world and make things a little bit better for the next generation and for my community.”